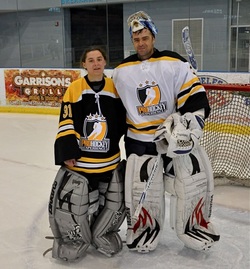 Hello and welcome to my website for my hockey card and hockey memorabilia collections.  My collection focuses on retired NHL goaltender, Curtis Joseph.  I collect everything of his from hockey cards to game used memorabilia.  I started collecting "CuJo" in 1997, when I was 10 years old.  Being a born and raised Oilers fan, and a goalie myself it was easy to become such a fan of "CuJo."  I have some great memories of past Oilers playoff series with CuJo stealing the show.  I am not only a "CuJo" fan because of his abilities as a goaltender, but more importantly because of everything he did and continues to do for the community and charities.  For me personally "CuJo" was a role model, both on the ice and off.

The picture above is of Curtis and I on the ice together at the 2011 Pro Hockey Experience camp in Niagara Falls, Ontario.
There is more than just "CuJo" cards and memorabilia in my collection.  I have enjoyed collecting other cards and memorabilia with a focus on past and present goalies.  In 2009 I started collecting Jonathan Quick cards.  After the Kings and Quick won the Cup and Quick won the Conn Smythe the price of his cards went up and the quantity of his cards produced greatly increased.  This all became too much for me and I gave up collecting his cards. Although I don't collect cards of Jonathan Quick anymore, I am interested in his game used memorabilia.  Currently I have a few pieces, including a glove, blocker and jersey.  Please contact me if you have any Quick memorabilia to sell.

In the summer of 2012 I found a new passion; fly fishing.  I have always enjoyed fishing but had never fly fished prior to the summer of 2012.  I was "hooked" as soon as I tried it.  I have added a gallery on this site of some of my fishing pictures.

I hope you enjoy looking at my site, if you would like to contact me about collecting or fishing please e-mail me at coho_connie@hotmail.com .  Please also contact me if you have any Curtis Joseph or Jonathan Quick game used memorabilia for sale or trade.

I am a member of a number of forums focused on hockey cards and memorabilia, I use the screen name: cujofan2000